The famous LEONIDAS Belgian Chocolates are renowned since 1913 as one of the finest quality chocolates, and make the mouth of all lovers of chocolate water.

The popular Belgian chocolates are created with respect for old traditions: because of the preparation with exclusive ingredients and 100% pure cocoa butter, the long-standing master-knowledge and the absolute freshness, Leonidas has been crowned as 'Warrant Holder of the Court of Belgium".

For more than a century, giving has been making people happy.

Over 100 years ago, Leonidas Kestekides first started working on our praline as we know it today. For four generations the Kestekides family made its mark on Leonidas, making this brand a real family business.

SWEET TEMPTATIONS AS A WAY TO SURVIVE

It all started when he was still young and took to the streets with his brother to sell granita and other sweets.

GRANITA, WINE AND THE PROMISED LAND

At the age of 18, the ambitious Greek exchanged the granita for wine and started selling it in la bella Italia. But that didn’t really work out for him. One of the lorries that was transporting a lot of his wine barrels, without insurance, was involved in an accident. Leonidas Kestekides was financially ruined, but he didn’t give up. His ambition got the better of him again and he crossed the pond to the United States. Here he learned the tricks of the trade of the thing he was most passionate about, and he became a confectioner.

LOVE TAKES HIM FROM NEW YORK TO GHENT

But how did this talented Greek end up in Belgium? Ten years later, in 1910, Leonidas Kestekides participated in the World Exhibition in Brussels as a member of the Greek-American delegation.

He presented his confectionery and patisserie creations to around thirteen million visitors. His efforts were rewarded: Leonidas was awarded the bronze medal. His success didn’t go unnoticed. All eyes were on Leonidas Kestekides, especially those of a particular Brussels beauty, Joanna Emelia Teerlinck. Could she not resist his sweet delicacies? Or could he not resist her slim figure and porcelain skin? Leonidas and Joanna married in 1912 and Ghent became his new home.

In 1913 Leonidas Kestekides made another appearance at the World Exhibition, this time in Ghent.

After he proudly presented his new creations to the visitors, on 27 October he was awarded the gold medal and a commemorative certificate. 1913 was a successful year for Leonidas. He opened his first tearoom in Ghent. Together with Joanna, he spoiled his guests with patisserie, confectionery, sweets and ice cream.

When the Germans invaded in 1914, Leonidas temporarily closed. But he noticed that the bourgeoisie still wanted to enjoy life's little pleasures... and his comeback was better than ever. In addition to his tearoom in Ghent, he opened a ‘tasting room and cold buffet’ in Blankenberge.

THE ARRIVAL OF BASILIO KESTEKIDES

While Leonidas celebrated his success with Joanna in Belgium, the political situation in Greece deteriorated. Rumours of Leonidas’s success made their way to his homeland and the Kestekides family decided to move to Ghent. Leonidas’s family did their bit for the brand, especially his nephew Basilio. Leonidas taught Basilio how to be a confectioner. The two complemented each other perfectly: one was a born salesman and the other was a creative spirit. They developed a father-son relationship and created a range of delicious pralines.

After Leonidas conquered the hearts of Ghent and Blankenberge, he decided it was high time to embrace Brussels.

By this time, his Greek family was taking care of the shop in Ghent. Leonidas and Basilio opened a new tearoom on the Rue Paul Delvaux in Brussels: the ‘Pâtisserie Centrale Leonidas’. Together they worked hard to establish the Leonidas brand in our capital.

Basilio and Leonidas were welcomed to Brussels with open arms. At night Basilio prepared his delicious pralines in a small workshop near the Grand-Place, and in the morning he crossed through the city with a horse and cart to sell his delights to a loyal clientele. Everything was running smoothly until Basilio got into trouble for street trading – the police told Basilio that he had to sell his products in a shop. He displayed his delicious pralines on the window sill and sold them from the sliding sash window to passers-by – a revolutionary idea! Basilio sold up to 35 kg of confectionery a day directly from the production workshop to the counter, without losing any of the freshness or time – and at half of the price of his competitors.

This was the start of selling through a sliding sash window, which later became the trademark of Leonidas.

Basilio came up with the brand name and logo for his uncle. He gradually started to take over all the hard work and management of the company. In 1937 he registered the name Leonidas with the city of Brussels.  He named it after his uncle and decided that the logo should be the Greek warrior Leonidas, in honour of his uncle. This marks the birth of the logo as we know it today.

A LUXURY PRODUCT FOR EVERYONE

Leonidas even kept going during the Second World War. Basilio bought cocoa and produced the chocolate himself. Leonidas became a synonym for success. On 20 February 1948 disaster struck: Leonidas Kestekides passed away.

Leonidas left his shops to his nephew, who seemed more motivated than ever.

Basilio wanted to make luxury products which everyone could afford. Demand for Leonidas pralines kept growing and Basilio was able to anticipate this trend. He did this not by increasing the price, but by expanding his workshop so that he could increase production.

Leonidas never wanted to turn its pralines into a scarce product by raising the prices; instead, it increased production to keep the prices low.

In Brussels they couldn’t get enough of Basilio’s traditional pralines. The pralines were of an exceptional quality for such an affordable price. Back then, for a 100-gram bag you paid no more than 10 francs (or 25 euro cents!) Many entrepreneurs started to knock on Leonidas’s door and soon dozens more shops were opened.

From that moment, things really took off for Leonidas. The pralines were sold in Belgium, the Netherlands, Luxembourg, Germany, Greece and the United Kingdom.

Anyone who tried Leonidas pralines just couldn’t get enough. The delicious chocolate was loved by everyone. Production expanded.

THE ARRIVAL OF THE ONE TRUE MANON

Famous, worshipped, loved, desired. The Manon we know and love today is a one of a kind. But how did it come about? The Manon originally consisted of nougatine and a walnut enveloped in a layer of sugar. Yanni Kesdekoglou, one of Leonidas’s family members, changed the recipe.

Yanni created a world first with this new recipe. He had the genius idea of replacing the melted sugar with white chocolate. At that time, nowhere else in the world were pralines being made with white chocolate. The walnut was then replaced by a hazelnut because you can toast it. This made it easier to store them for longer. Finally, he replaced the nougatine with the well-known buttercream. This new recipe transformed the Manon into the praline that we love so much.

Maria Kesdekoglu-Kestekides took charge of the company following the death of her father. She was assisted by her brother Dimitrios Kestekoglou and her niece Vassiliki Kestekides. The production of pralines continued to grow.

ANNOUNCED AS PURVEYOR TO THE ROYAL HOUSEHOLD

On 15 November 2013 King Philippe of Belgium announced his list of certified purveyors to the royal household. Leonidas was awarded a place on this list for its exceptional quality and affordable prices. It’s a great honour, and recognition of the perseverance and hard work of everyone who has been part of the development of the Leonidas brand. 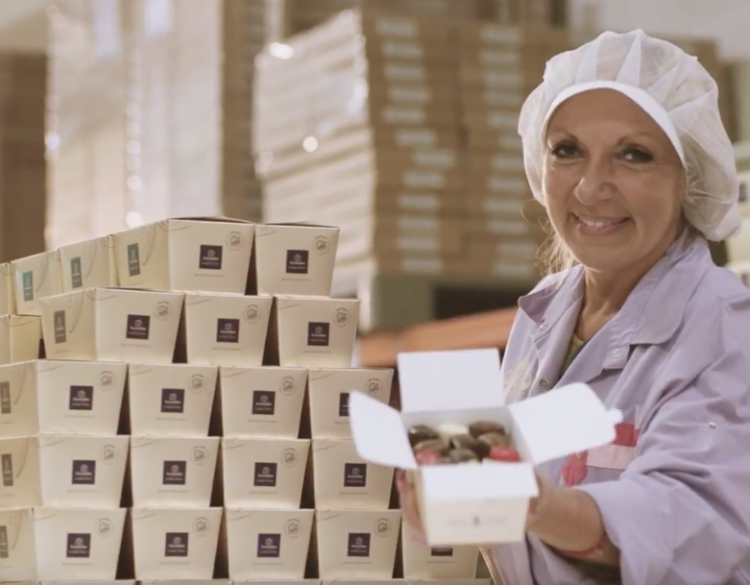 Why Leonidas? Watch our video